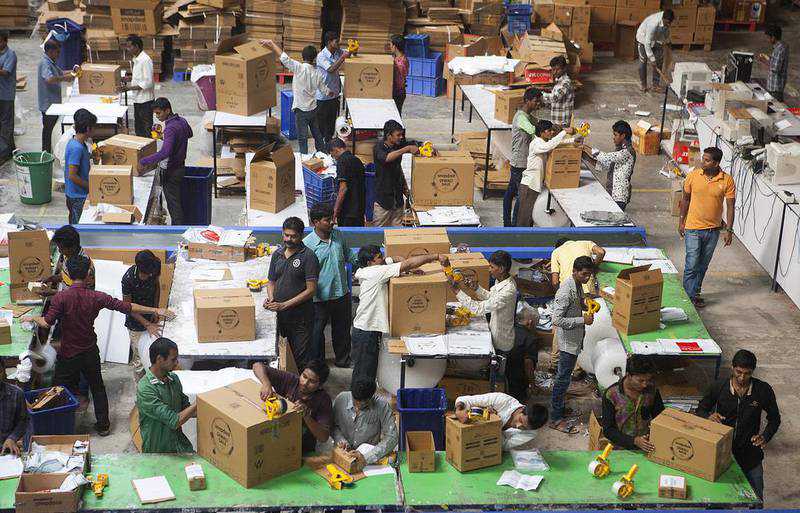 Snapdeal, the Indian e-commerce start-up backed by SoftBank Group, filed preliminary documents for an initial public offering, adding to the rush of tech companies looking to debut on the country’s exchanges amid a record-breaking stock market rally.

The New Delhi-based company plans to raise 12.5 billion rupees ($165 million) through the sale of new shares, according to its draft red-herring prospectus, or DRHP, filed with the Securities and Exchange Board of India. In addition, existing stockholders including SoftBank, plan to sell as many as 30.77 million secondary shares.

Snapdeal, founded in 2010, once rivalled Amazon and Walmart’s Flipkart in the burgeoning India market, but fell behind as its deep-pocketed competitors invested heavily to grab market share. Revenue from operations dived 44 per cent to just 4.7bn rupees in the year ended March 2021 as the two bigger players eroded its share of the market. Its loss narrowed by more than half to 1.25bn rupees.

Snapdeal has refashioned itself to stand apart from its bigger competitors and focus on value-driven e-commerce. The company, whose other backers include eBay and Sequoia, recorded operating revenue of about 2.4bn rupees in the six months to September 30. It reported an 82 per cent jump in net merchandise value, a measure of sales volume, to 3.74bn rupees in this year’s fiscal second quarter versus the final quarter of last year.

Snapdeal’s IPO, targeted for early next year, comes after a record year for India market debuts. Food-delivery pioneer Zomato set off the rush to market, followed by successful offerings from the likes of FSN E-Commerce Ventures, which operates the Nykaa beauty business. One97 Communications, which runs digital payments giant Paytm, pulled off the largest IPO in the country’s history, at $2.4bn, but its shares quickly tumbled.

On Tuesday, MapmyIndia, a digital mapping company that works with Apple and Amazon, surged more than 50 per cent on its first day of trading.

Founded by Kunal Bahl and childhood friend Rohit Bansal, Snapdeal began as a deals website before expanding in online retail. In 2017, as the company struggled, Masayoshi Son’s SoftBank, one of its biggest backers, pushed the founders to merge with archrival Flipkart. Mr Bahl and Mr Bansal ultimately decided not to proceed with the deal, requiring them to focus on reducing their cash burn.

The decade-old start-up, also backed by BlackRock, Temasek Holdings and eBay, has since shifted its business model to focus on Bharat – the non-English speaking, non-affluent, non-urban and non-tech savvy bulk of India’s population. Amazon and Flipkart tend to cater to big-city buyers, selling big-ticket items like premium smartphones and high-priced electronics.

Snapdeal sells table mats, tummy trimmers, beard grooming oils and fleece blankets, all under $5. More than nine-tenths of the 60 million items it lists are priced under 1,000 rupees.

During the most recent festival season, Snapdeal’s sales volumes grew 254 per cent in the fashion category, 101 per cent in the kitchen category and 93 per cent in the beauty category, according to a company release in early November. Axis Capital, BofA Securities India, CLSA India and JM Financial are among the book runners for the IPO.