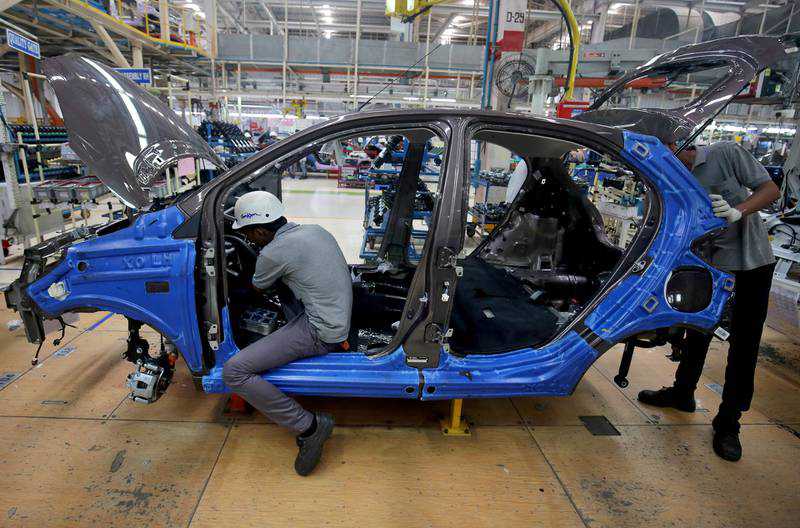 Image Collected
India's electric vehicle industry has been slow to take off, despite a push by the government to transition away from internal combustion engine cars to reduce pollution levels and dependence on costly fuel imports.

But the sector received a huge boost when US private equity firm TPG's Rise Climate Fund and Abu Dhabi holding company ADQ said on October 12 that they would inject $1 billion into Tata Motors' passenger electric vehicle business. TPG and ADQ will hold between an 11 per cent and 15 per cent stake in Tata's EV business, which will be spun out into a new unit that is valued at $9.1bn, Tata said.

The investment in Tata Motors, which represents the first major fundraising by an Indian car maker in the electric vehicle segment, is set to be a game changer for the company and the broader industry, analysts say.

The Indian government aims to make 30 per cent of private cars on its roads be electric by 2030. Currently, however, less than 1 per cent of cars sold in the country are EVs.

Data from the Society of Manufacturers of EVs shows that 5,905 electric cars were sold in India in the last financial year to the end of March 2021. The low sales are due to factors including a lack of charging infrastructure and the high cost of vehicles compared with traditional cars. These hurdles and a subsequent lack of demand have also held back manufacturers.

Tata Motors, which is one of India's largest car makers and also owns Jaguar Land Rover, has the lion’s share of the country's electric car market, accounting for about 70 per cent of sales.

The TPG deal “definitely is a big boost not just for Tata Motors' future EV plans, but also for the Indian EV industry as a whole as this will encourage more investments into this sector – something that is required to decrease dependency on imports through local manufacturing and for the scalability of the EV ecosystem,” says Sarthak Shukla, founder and chief executive of eVolt India, an EV charging infrastructure company.

The sector is in a nascent stage in India and Tata has only two models of electric cars available on the market. There are very few options available in India in general, with Hyundai, Mercedes and MG among a handful of companies selling electric cars there. India's biggest car maker Maruti Suzuki has yet to enter the space.

Tesla, the world's largest electric vehicle manufacturer, is also eyeing India and set up a local subsidiary earlier this year. However, Elon Musk, the company's founder and chief executive, has said that he wants to test drive the market with imports of its cars before manufacturing.

The $1bn investment will put Tata in a position to ramp up growth and bolster its position as India's market leader in EVs, N Chandrasekaran, chairman of Tata Motors, said on October 12.

The aim is “to create a market-shaping electric passenger mobility business in India”, he added.

Through the deal, Tata and TPG will “leverage all existing investments and capabilities of Tata Motors”, the companies said.

The plan is for the unit to create a portfolio of 10 EVs and to work on the “creation of a widespread charging infrastructure to facilitate rapid EV adoption in India” in conjunction with Tata Power, according to the statement. It is also aiming to focus on areas including developing automotive and battery technologies.


“Tata Motors can establish itself as a formidable player in the EV space in India,” Arun Agarwal, deputy vice president of fundamental research at Kotak Securities, says. “Tata Motors will aggressively launch new products in the EV space over the next five years and would be looking at leveraging its group companies to accelerate EV adoption.”

Harsh Patidar, an auto analyst at CapitalVia Global Research, says: “I believe the fundamentals of the company will change in a big way in the long term” due to the deal.

“Seeing these steps towards electric vehicles, Tata Motors is going through a major shift structural change,” he says.

Investors have been encouraged by the fundraising. Tata’s share price has rallied about 18 per cent since the announcement, while its stock has more than doubled this year.

This comes as India's car industry has been affected by the Covid-19 pandemic and a global semiconductor shortage. The sector was struggling before the pandemic due to weak economic conditions. Domestic passenger vehicle sales in India fell to 2.71 million in the 2020 financial year compared with 2.77 million in 2019 and 3.37 million in 2018, according to figures from the Society of Indian Automobile Manufacturers.

But Tata Motors is proving to be relatively resilient despite the challenges. Investment bank Morgan Stanley this month upgraded its rating on the car maker and said it expects the company's India business to post a full-year profit following eight years of losses.

“Tata Motors is a major commercial vehicle and passenger vehicle manufacturer and after this deal and the way Tata Motors is gearing up as self-reliant, it might change the whole scenario for the sector,” Mr Patidar says.

Industry insiders are also upbeat about Tata's plans because it aims to develop areas such as India's insufficient charging network.

India has just 1,300 public charging points, compared with about 950,000 in China, according to the Society of Manufacturers of Electric Vehicles.

“As more wide-scale adoption happens, India’s vast landscape of roads and highways will require a denser charging network than is there today [and this] can only be enabled by local manufacturing as developing a charging network is capital intensive and requires various forms of upfront investment,” Mr Shukla says.

“TPG's investment into Tata will also lead to the rise of local ancillary suppliers, which is also expected to help the overall ecosystem.”

Commenting on the deal, Jim Coulter, the managing partner TPG's Rise Climate Fund, said: “There is significant momentum around India’s EV movement, supported by the government’s vision and policies, as well as growing consumer demand for greener solutions.”

The Indian government is eager to grow the sector, particularly as it seeks to fulfil its promise of reducing its carbon footprint under the Paris climate agreement and given that the country has some of the world's most polluted cities.

These efforts include launching a $3.5bn incentive scheme last month to encourage manufacturing of EVs and their components. Currently, the major factor driving up the price of EVs is the cost of batteries because of a dependence on imports. But India is hopeful that it can expand its local manufacturing of components, including batteries.