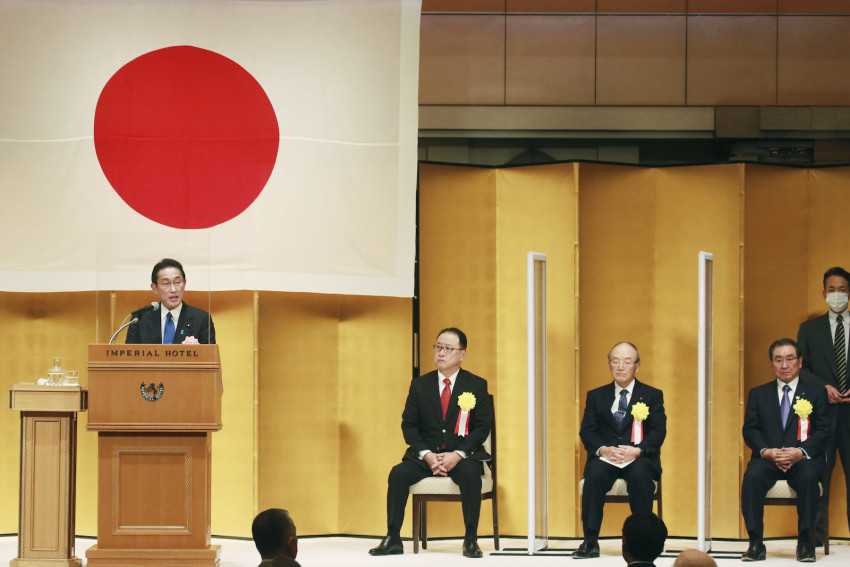 Ahead of this year's annual wage negotiations between management and labor unions, Kishida, who took office in October, is calling for a pay hike of over 3 percent by companies that have seen their earnings recover to prepandemic levels.

"Wage hikes mean future investments. It's critically important for future economic growth. I'd like to see you take an aggressive stance and cooperate," he told a meeting of business leaders who gathered for New Year celebrations.

Kishida said the country needs to set in motion a "virtuous cycle of growth and distribution" at a time when the recovery from the pandemic comes with opportunities for the new era.

The gathering was organized by the Japan Business Federation, the country's most powerful business lobby known as Keidanren, the Japan Association of Corporate Executives and the Japan Chamber of Commerce and Industry.

Kishida has placed priority on creating a new type of capitalism by ensuring both economic growth and wealth redistribution.

Accelerating wage growth, which has been sluggish in Japan as the country had been plagued by deflation for years, is a key part of his agenda and the government plans to offer tax reductions for companies going ahead with pay hikes.

The shunto wage negotiations this spring come as the recovery from the COVID-19 pandemic is patchy and its pace remains uneven among sectors.

The Japanese Trade Union Confederation, the country's biggest labor organization known as Rengo, has decided to call for a combined 4 percent pay hike -- around 2 percent in pay scale and 2 percent in annual pay.

Keidanren, meanwhile, does not plan to encourage its member companies to consider wage hikes across the board.