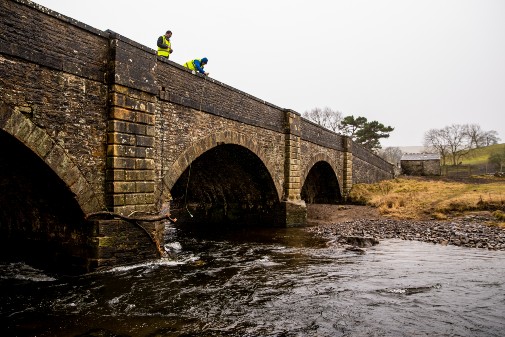 Collected Image
The research team will investigate the most dangerous chemicals and chemical mixtures being emitted into the county’s waterways and the role they are playing in nature loss.

Researchers from the universities of York, Sheffield and Durham will analyse chemical pollution levels along nine rivers in Yorkshire – the Aire, Calder, Derwent, Don, Nidd, Ouse, Swale, Ure and Wharfe.

Rivers and other freshwater waterways are becoming increasingly polluted by agriculture, sewage, human activity and plastics, with only 14 percent of rivers meeting a good level of ecological status.

Cleaning chemicals
Chemicals are discharged into rivers and streams on a daily basis through domestic and industrial wastewater containing things like cleaning chemicals, personal care products and pharmaceuticals, as well as from the application of pesticides or the use of veterinary medicines.

The research team aims to use their findings to identify ways to better monitor and mitigate the impact of chemicals on water quality and nature loss, both now and into the future as our climate and population changes.

Quality failures
Leader of the study, Professor Alistair Boxall from the Department of Environment and Geography at the University of York, said: “We are facing a global biodiversity crisis and the quality of freshwater ecosystems is declining more rapidly than either terrestrial or marine systems.

“One in 10 freshwater and wetland species in England are threatened with extinction and two thirds of existing species are in decline. Regulatory data suggest that chemical pollution from wastewater discharges, transport, urban environments, agriculture and mining all contribute to failures against existing quality standards.

“Our study responds to the urgent need for more effective methods for assessing, predicting and managing the impacts of chemicals both now and in the decades to come. This will bring us closer to halting biodiversity loss in UK rivers while continuing to realise the societal benefits of chemicals.”

The project is being funded by the Natural Environment Research Council (NERC) and is one of five new research projects which have been awarded a share of £8.4 million to investigate how pollution impacts UK rivers.

Policy makers
The researchers from York, Sheffield and Durham will work closely with partners including key representatives from the Joint Nature Conservation Committee (JNCC), the government’s Health and Safety Executive (HSE), major industry including Unilever, UKWIR and Network Rail and the charities the National Trust and the Rivers Trust.

The study will provide policy makers with the knowledge and frameworks to make important changes to the way chemicals are risk assessed, enabling the protection of biodiversity and key environmental functions in areas where they are vulnerable. Identifying the most harmful chemicals and chemical mixtures will put manufacturers of chemicals in a better position to produce substances that are beneficial to society but which do not negatively impact the natural environment.

Professor Boxall added: “Only by taking the integrative and system-wide approach adopted in this project will we be able to deliver the Environment Act's aspiration to ‘reverse the decline in species abundance by the end of 2030.”
Source: https://www.york.ac.uk