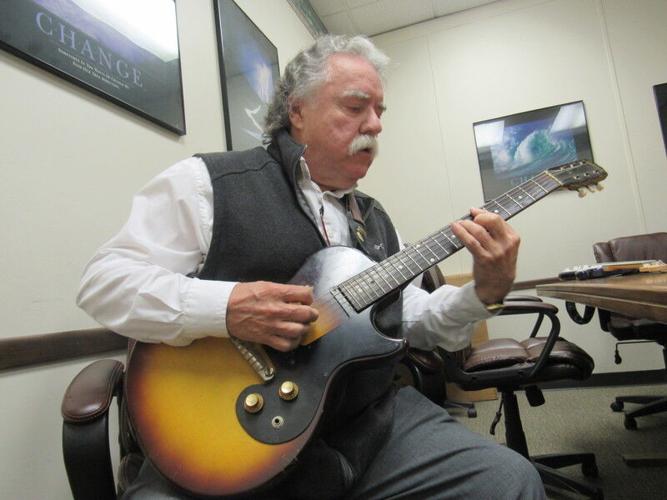 Collected Image
Rocker Don Price doesn't just play that old time rock 'n' roll, he remembers it. He said he originally wanted to be a drummer until he saw the price. “A drum was $480. A guitar was $120,” he said. The first guitar Price recalls playing was his mother's 1940-something Epiphone. He was 12 at the time. He got his first guitar, a Gibson Sunburst Music Maker electric, a year later in 1960 at Crow's Music Co.

Price played violin in the Muskogee High School orchestra, but wanted to venture out. He quit college after two years to pursue his dream of performing. It wasn't easy. “Pie in the sky,” he said. "After being on the road for six months or so, you find out that, unless you're big time you're just seeing the sights.”
Read More : ‘Queen of Folk’ Joan Baez says goodbye to stage
Music store jobs helped Price pay the bills while he sought gigs. He began playing with the Tulsa band the Bop Cats in the 1980s.

Price recalled performing with such greats as Chuck Berry, the Doobie Brothers and Martha Reeves and the Vandellas. He also performed at the 1991 inauguration of Governor David Walters.

Such work hasn't kept him from getting involved with the Oklahoma Music Hall of Fame, especially in the formative years. Price helped manage the stage for early inductions and concerts.

Price now performs with Muskogee area musicians in The Don Price Band. He still has that Sunburst, as well as a 1968 Les Paul Gibson electric guitar. "There is a difference between playing the guitar and being a guitar player,” he said. “There's no such thing as a best guitar player. In each field there is a different style of playing that the other one can't play.”

He used Nashville Sound guitar master Chet Atkins and 1980s rocker Eddie Van Halen as examples of different stylists. "Some people have fun playing polkas, but that's not me. A lot of people have a wonderful time playing bluegrass music. But that's not me, either," he said. "I'm basically a hard cider, top 40 Pop."

Don Price took no formal guitar lessons, but he had a way to learn quickly. He said he first learned guitar basics from how-to books. "How you learn to play, or how to do anything is by repetition,” Price said. "You keep going over it and over it until you learn it."

He also learned from guitarists who played good stuff. "You basically went from guy to guy learning three or four chords; you pick those up along the way," he said. "Sometimes there were private instructors available, but they seemed to teach what they wanted to teach, not what you wanted to learn."

He recalls that, back then, he wanted to play like Chuck Berry, and he also rocked to Duane Eddy and the Ventures. “The deal about an instrument is that you can learn something from the person who made you start it a month ago,” he said. “They might do some little thing different that you didn't hear.”

As an adult, Price got involved with the Tulsa rock 'n' roll revival group, the Bop Cats, which formed around 1980. He said it was formed by Rockin' John Henry, a well-known disc jockey, Henry's sister, their cousin "and a couple of people they picked up."

"They even had a place called Bop Cat House," Price said, adding that he got involved around 1985. "They asked around and they said, 'you want somebody who knows all the songs,'" he said. "It was weekend stuff. You don't make a lot of money, but you make a lot of fame."

The group played area festivals such as Mayfest, Rooster Days and Okmulgee's Pecan Festival. They got enough attention to become the opening band for concerts by such major acts as Blood, Sweat and Tears. "We had about five people die over the years," Price said.

Good fellowship kept the band rocking for more than 30 years. “Everybody just got along well,” he said. “Everybody had fun." Price recalled working with music greats at Oklahoma Music Hall of Fame. "A lot of them I'm glad that I met. And the other half? No," he said.

Price recalls managing the stage for several OMHOF inductions, including the first one, which featured 1950s songbird Patti Page. Page was "cordially friendly," Price said. "Her husband was an ass."

One star that pleased him was Oklahoma Music Hall of Famer Vince Gill. "He is a gentleman," he said. "He was pleasant. If he had a guest there, he sort of escorted them around and made sure they got where they were supposed to be. Just a good old boy."

Price said he was surprised by David Gates, leader of the 1970s easy rock group Bread. "He's real introverted," Price said. "And actually, so was Toby Keith. He seemed to be a little introverted. He goes from being an introvert to his stage persona, which is loud and forceful." Carrie Underwood stood in the rain for nearly an hour signing autographs, he said
Source: https://www.muskogeephoenix.com