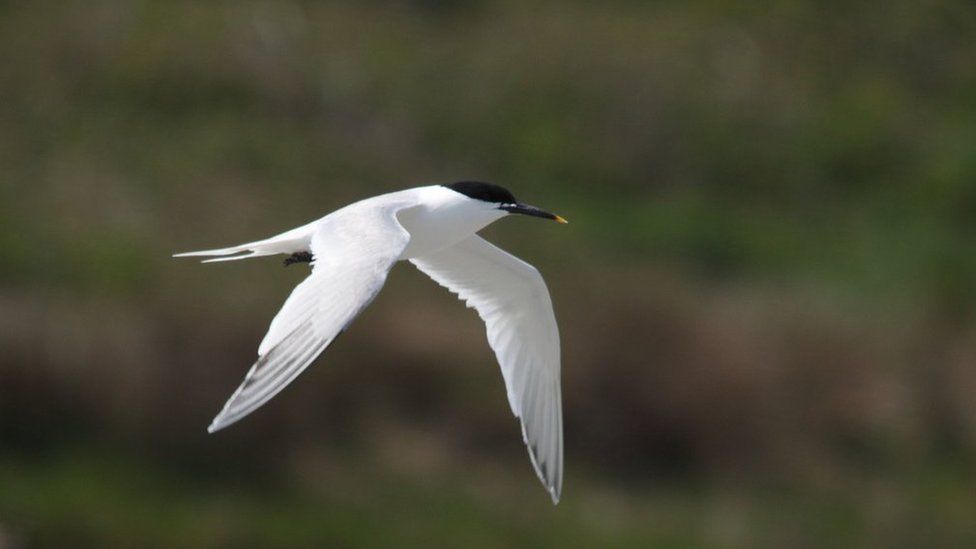 Collected Image
Several hundred sea birds have been lost to bird flu at a nature reserve in Norfolk. The breeding colony of sandwich terns, at Scolt Head Island near Brancaster, may have lost three-quarters of its chicks to the virus, say experts.

Bird flu is devastating several species, including gannets, terns and great skuas along the UK coastline. The government confirmed the outbreak and said it was monitoring the effect of bird flu on wild species.

The nature reserve off the north Norfolk coast, managed under lease by Natural England, is home to about 4,000 breeding pairs of sandwich terns.

'Can't bounce back quickly'
Its warden has taken to Twitter to post images of binbags of carcasses and posed the question "are we witnessing the collapse of seabird colonies around the North Sea?"

The British Trust for Ornithology (BTO), based in Thetford, said the impact of bird flu was "devastating" - particularly as sea bird populations take a long time to recover.

Unlike garden birds, which may lay eight to 10 eggs, possibly twice a year, sea birds have one breeding season and lay one, perhaps two eggs.

"They are long-lived and slow-reproducing birds and they can't bounce back quickly from mass mortality like this," said Viola Ross-Smith of BTO. "They are already under pressure from other threats - from fishing, climate change, development, pollution, they really don't need this and it's awful to watch.

"We probably won't know the longer-term impact for some time." The virus has been identified along the coast, from the Shetlands and Orkneys, through north-east England to East Anglia and the Channel Islands.

A colony of great skuas in the Shetlands, which amounts to 60% of the global breeding population, have been "absolutely hammered" by bird flu, Ms Ross-Smith added.

In the north-east, hundreds of sea birds have died, with several species affected and some found washed up on the coastline.

Ms Ross-Smith said surveillance was "key", with the public urged to keep themselves and their dogs away from dead birds and report them to the Department for Food, Environment and Rural Affairs (Defra).

"It's the best we can do at the moment," she added. "Staff are bagging up the corpses, which is particularly important, especially as other species scavenge dead birds."

Martin Fowlie, of the RSPB, agreed that the impact of bird flu on sea bird populations this year was "unprecedented". "We need the government to get a grip on this in order to do better testing, monitoring and surveillance," he added.

Defra said it was aware dead sandwich terns found at Scolt Head Island had tested positive for bird flu. It said it was working with groups including the RSPB and Natural England to study its impact.