Turkey, Bangladesh to maintain positive momentum at all levels: Envoy 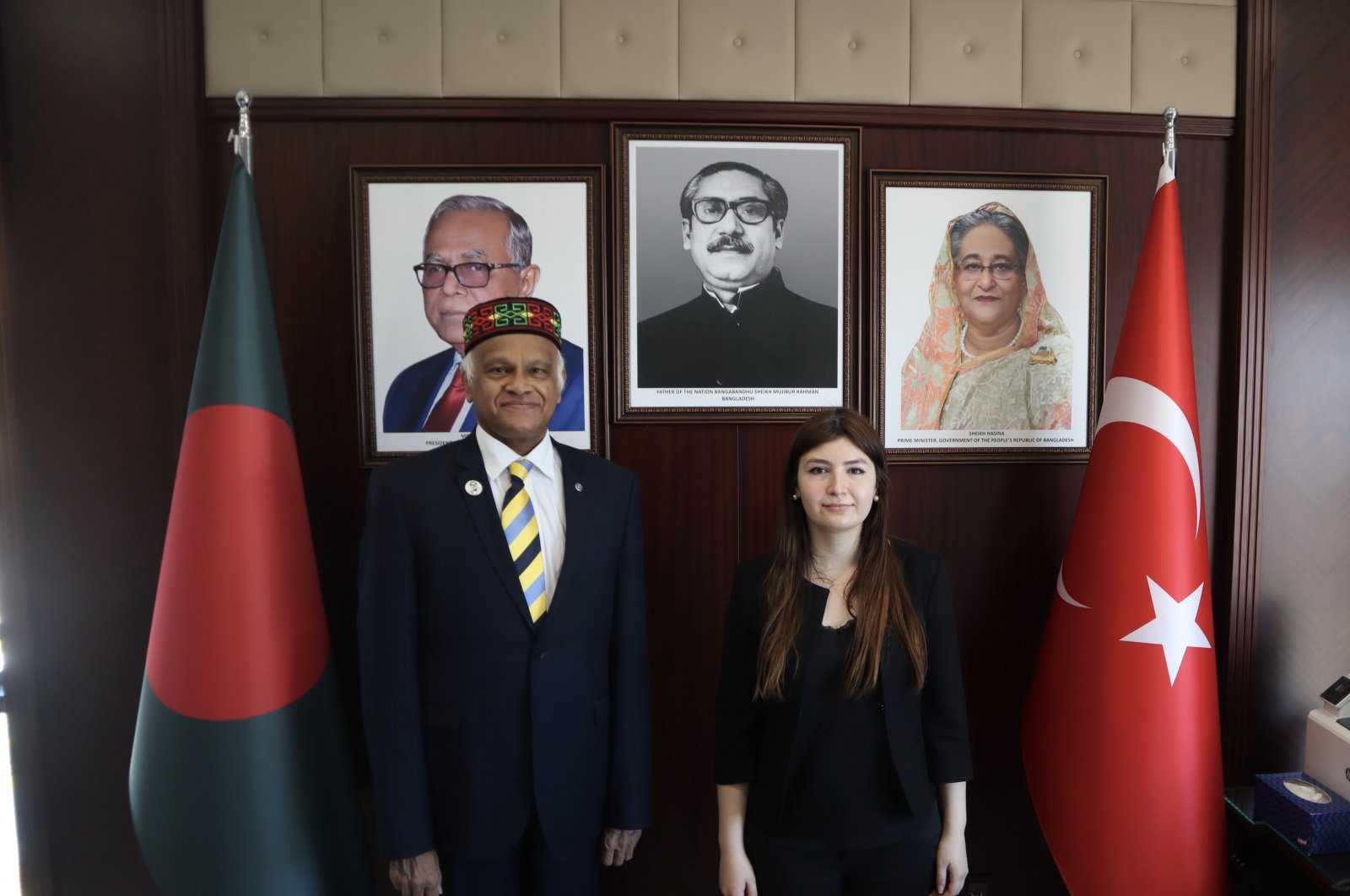 Ankara and Dhaka, which already enjoy good relations, will maintain this momentum despite the COVID-19 pandemic and continue to cooperate across all fields, including politics, business, defense and culture, Bangladesh’s Ambassador to Turkey Mosud Mannan stated while marking the golden jubilee of the country’s independence.

“We are trying even during COVID-19 to maintain a very good bilateral understanding and cooperation,” Mannan stated in an exclusive interview with Daily Sabah, saying that President Recep Tayyip Erdoğan is expected to visit Bangladesh this year within this scope.

Emphasizing that as a senior diplomat he is also an advocate for public diplomacy, Mannan underlined the importance of person-to-person contact at all levels in all professions and youth-to-youth exchanges.

“We will try to continue the exchange of everything, which used to happen until the end of 2019, so that when the new normal situation comes, we will be ready. We will keep the momentum, maybe not at high speed but at a moderate speed.”

When asked if Bangladesh will participate in the Antalya Diplomacy Forum set to take place in June, Mannan said, “Bangladesh will be there,” noting that Foreign Minister A.K. Abdul Momen accepted the invitation of his Turkish counterpart, Mevlüt Çavuşoğlu.

Given Bangladesh's status as one of the fastest-growing economies in the world over the past decade, the two countries put especially high emphasis on trade and business cooperation.

Mannan highlighted the issue, saying that he will work in this area and meet with businesspeople and companies as well as their representatives in Turkey to “negotiate further how business can continue in a challenging environment.”

“Turkey’s infrastructure and construction companies show interest to go for our big projects. We have to encourage them to take part in the tenders in addition to regular business,” he said.

“Bangladesh wants to learn from your success in the handling of tourists. My duty will be to have a good understanding with your culture and tourism ministry so that we can bring young intrapreneurs from Bangladesh to learn how you are promoting and had been promoting pre-COVID-19 tourism,” Mannan said.

The ambassador touched upon the similarities between the two cultures, describing Turkey as a friendly country with great cuisine and an example of an open-minded Muslim nation. “Bangladesh is also a free-minded, mainly Muslim population.”

Mannan also envisages improving relations in the field of education. “We already have around 600 students. I want to increase the number to 1,000 as early as possible because your universities especially in the fields of science and technology are very improved.”

“It will be a two-way traffic,” he stated, “We will try to send more students here, and we will try to attract more students or young professionals for training to Bangladesh." Explaining that efforts in this regard are already in place, Mannan said that he would sign an agreement with a university in the northern province of Samsun and a university in Bangladesh to initiate an educational, cultural and scientific exchange and establish a joint master's program between the two countries.

Highlighting the Bangladeshi people's interest in Sufism and the great philosopher Mevlana Jalaladdin Rumi, the ambassador said he planned to host organizations in the central Anatolian province of Konya, where Rumi's tomb and world-renowned Mevlevi whirling dervishes are based.

“We promote Sufism to show Islam’s chance for peace. People do not understand that we Muslims mainly stand for peace. So, we want to promote that Islam is for peace and Sufism is a way.”

Mannan is also planning to meet the head of the Yunus Emre Institute (YEE), the worldwide non-profit focused on teaching the Turkish language, “so that we can request them to start a branch in Bangladesh.”

Asia Anew partner
Ankara has frequently voiced that Dhaka is one of Turkey’s key partners in its Asia Anew initiative with its vibrant economy and young population.

Ankara is adopting a multidimensional foreign policy and is taking firm steps toward new regions, one of which is Asia. Turkey already has 32 embassies on the continent, including in all 10 of the Association of Southeast Asian Nations (ASEAN) countries.

The Asia Anew Initiative was officially announced in August 2019 by the Foreign Ministry. Its goal is to improve ties with the continent's nations in different regions in terms of education, defense, investments, trade, technology, culture and political dialogue.

Elaborating that both countries have their own comparative advantages in terms of economy and trade, Mannan pointed to their existing cooperation, such as in the pharmaceutical sector, which Bangladesh exports.

“We are exporting medicinal ingredients. In return, we know that Turkey has a very good medical system – doctors, treatment systems, hospitals.”

He recalled that Erdoğan in December stated that Turkey could help Bangladesh build modern hospitals and promote better treatment.

“We are already negotiating to build one or more hospitals with Turkish assistance and expertise.”

He said the countries could cooperate in the field of software technologies as Bangladesh has been putting increasing emphasis on the area.

“We are already very much involved in trying to attract investment from Turkey. We will further try to draw attention to promote the Asia Anew business cooperation.”

Another area that is already garnering interest and promises more collaboration is the infrastructure sector, the envoy stated. “In the construction industry after China, Turkey is the second in the world.”

Mannan highlighted the large population of his country while underlining the importance of adequate infrastructure. With a population of 180 million, the country needs more houses, roads, highways and bridges, he added.

“I will try to draw the attention of the sector and encourage them to come to Bangladesh and get involved in these infrastructure development projects, both private and government sector,” Mannan said, noting that Turkey currently has a relatively small presence in this respect but there is potential for more collaboration.

The two countries also cooperate in terms of their defense industries and have already carried out training programs and joint collaborations. Purchases of Turkey’s defense industry products will also continue, Mannan stated. “Turkey is highly innovative in the sector and the whole world is interested in its ammunition, equipment and software.”

Rohingya issue
Mannan discussed the challenge the displaced Myanmar Rohingyas present to Bangladesh after the minority crossed the border in August 2017, putting great pressure on Bangladesh's economy. “With the support of countries like Turkey and other friendly nations, we have been taking care of more than 1 million Rohingya during the last four years.”

The envoy aims to cultivate more sympathy for the displaced Rohingyas who have been suffering as a result of political incidents in Myanmar since the end of the 1970s. He pointed out that there has been a recent change in the country’s government and now there are more challenges for the Rohingyas.

The Southeast Asian country, also known as Burma, has been in crisis since the military seized power from Aung San Suu Kyi's elected government on Feb. 1, with almost daily protests and a crackdown by the junta in which hundreds of people have been killed.

The situation in Myanmar has to stabilize in order for the Rohingya to return Mannan stated, explaining that people will not return to persecution and will want to return to their own region which was once known as Arakan state. We have to continue negotiating for these, Mannan said.

Since 2017, hundreds of thousands of Rohingya have fled Myanmar's military abuses and taken refuge in neighboring Bangladesh. The crisis has led Naypyitaw to be accused of "genocide" before the International Court of Justice, the United Nation's highest judicial body.

“We hope for a legal framework so that the Rohingya population will have again a chance to go back to their own land and country, Myanmar,” the envoy said.

Mannan said that Bangladesh is grateful for the all-around support Turkey gives in this regard. “Turkey has made its presence felt in different international platforms, starting from the OIC, U.N. and wherever there is a possibility – it stood for the displaced people and for Bangladesh’s stance.”

He added that besides the Turkish government, the people, NGOs and media have vocalized their support.

“We want that Turkey to remain as much vocal as possible so that the Rohingya will continue to receive support. If Turkey, as a strong country, will remain vocal, these people will not be forgotten.”