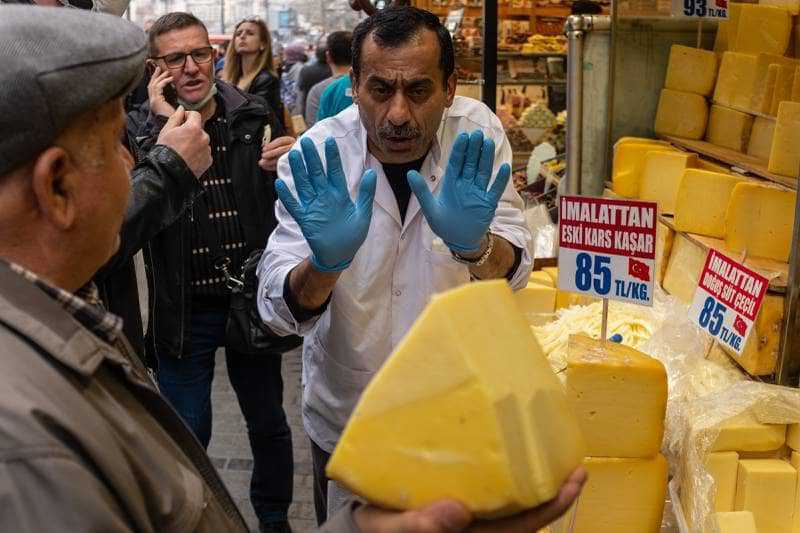 People shopping for Ramadan supplies in Istanbul.
Turkish inflation is galloping towards a fresh 20-year high, leaving the lira increasingly vulnerable by depriving the currency of a buffer against market sell-offs.

A three-month policy pause by the central bank means Turkey’s interest rates — already the world’s lowest when adjusted for prices — are set to reach new depths as the cost of everything from food to energy surges. Data due on Monday will show inflation climbed to an annual 61.5 per cent in March from 54.4 per cent a month earlier, according to the median of 19 estimates in a Bloomberg survey.

Turkey’s ultra-loose monetary policy is out of synch with the rising hawkishness of many of the world’s central banks at a time its economy is bracing for commodity shocks unleashed by Russia’s military offensive in Ukraine. With Turkey’s real rates at minus 40 per cent, the lira has already come under pressure, staging the worst performance in emerging markets against the dollar in March.
Read More : Turkish lira continues to fall after interest rate cut
Given President Recep Tayyip Erdogan’s goal of using a cheaper lira to turn Turkey into a manufacturing power, rate hikes are not on the agenda. Declines in the currency, which has lost more than 9 per cent so far this year, are meanwhile feeding into inflation by making imports more expensive.

“After a decade of steady weakening mixed with the occasional meltdown, the Turkish lira faces the risk of another crisis year," said Bloomberg Economics.

"An escalation of the war in Ukraine would hit the currency through rising import costs, while a swift end to the conflict could bring pressure from higher global interest rates.”

Governor Sahap Kavcioglu has said that support for the local currency would be a key objective this year but has shown little sign this would involve a tighter monetary policy stance. The central bank is hoping to curb price growth by taking measures to encourage de-dollarisation. Its next rate meeting is scheduled for April 14.

With the central bank on the sidelines, Mr Erdogan’s government is trying to contain prices by means of a new round of value-added tax cuts on some staple products, which will go into effect by April. But the changes represent a one-off measure that’s unlikely to move the needle for prices.