Why did Elon Musk buy Twitter and what happens next? 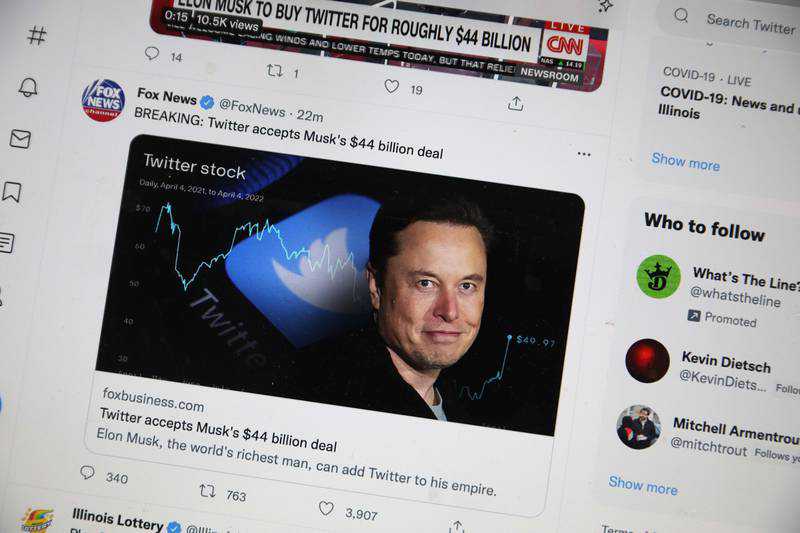 Collected Image
Elon Musk finally did it. Twitter, the social media titan whose board Mr Musk refused to join, is now his, making the world's wealthiest person and technology mogul an even bigger force to reckon with.
After some internal discussions, Twitter's board on Monday announced that it unanimously agreed to sell the platform in its entirety to the chief executive of Tesla Motors, in a deal valued at $44 billion.

Long before his disclosure, Mr Musk had quietly started on January 31 to build up his stake in the company. It is unclear if the Tesla founder already had intentions to fully acquire Twitter at the time.

Mr Musk then on April 14 made his surprise offer to buy 100 per cent of Twitter for about $43bn. The company then countered with a "poison pill" shield, adopting a limited-duration shareholder rights plan, which would enable its shareholders to buy additional stock.

What is Elon Musk's plan for Twitter?
Mr Musk has always been a proponent of free speech, as shown by the criticism he levied on Twitter in the lead up to his purchase of the company. Free speech is on top of his agenda once he finally takes full control of the transaction, which is expected to be finalised in 2022.

Mr Musk has pledged that he will transform Twitter by loosening rules on what content can be posted, eliminate advertisements, reduce spam, open the platform's algorithm and add an edit button, which is being tested by Twitter.

Not everyone, however, seems to be convinced. Former US president Donald Trump ― arguably the world leader who posted the most on Twitter, before his account was permanently banned on January 6, after the deadly siege on the US Capitol ― has said he has no plans to rejoin Twitter after the deal with Mr Musk was announced.

“I hope Elon buys Twitter because he’ll make improvements to it and he is a good man, but I am going to be staying on Truth," Mr Trump was quoted as telling Fox News on Monday, referring to his own social media platform, Truth Social.

What is Elon Musk's net worth?
Mr Musk has been ranked the world's wealthiest person since January 2021 and had an estimated net worth of about $257bn as of Tuesday. The majority of his wealth comes from Tesla, in which he owns a 21 per cent stake.

Aside from being at the helm of electric vehicle major Tesla, aerospace company SpaceX and infrastructure entity The Boring Company, Mr Musk is also the co-founder of neurotechnology venture Neuralink and artificial intelligence company OpenAI.

He also played a key role in founding the payments company PayPal. Mr Dorsey, meanwhile, has a net worth of about $7bn. The sale of Twitter will net him a relatively modest sum of about $975 million, based on the 18 million shares or 2 per cent he owns in the company.

What happens next?
Corporate takeovers are complicated, especially those of Twitter's magnitude. In terms of financing, Mr Musk was able to secure $46.5bn to take Twitter private, enough to sway the company's board to engage him on the negotiating table. Twitter, however, said that Mr Musk is “providing an approximately $21bn equity commitment".

What we don't know is where the rest of the money would come from. Private equity firms – which typically avoid hostile takeovers – may come on board, now that the deal has turned friendly. Some existing shareholders could also roll their stakes into the new private company.

"All of that means that Musk might not be on the hook for much of the money himself, which could be a relief to shareholders of Tesla, who’ve been worried he’d sell his stake in the electric car maker to fund Twitter," Bloomberg reported.

Who will own and run Twitter?
Twitter chairman Bret Taylor and chief executive Parag Agrawal are still part of the company. But that could quickly change. It's obvious that Mr Musk would well be in the running to take a top role in Twitter's eventual new leadership, but given that he is already chief executive of both Tesla and SpaceX, in addition to his other endeavours, chances of him becoming chief executive may be limited.

His plans are unclear for now, but if Mr Musk is not chief executive, he would definitely want someone he knows and trusts – and, more importantly, who shares his reform vision on Twitter – to run the company. If he does not hand-pick one, a thorough search will be conducted. Mr Musk has in the past expressed dissatisfaction about Twitter's leadership.

In terms of ownership, Twitter said it was selling itself to an entity "wholly owned" by Mr Musk. So far, no co-investors have been named, and anyone who may join in that capacity will be limited to being minority shareholders.

One thing to note about private companies is that, unlike public or listed companies, they are not required to disclose their financial reports, which means there is less or no shareholder pressure to show profit and revenue for. Twitter will be reporting its fiscal first-quarter results on Thursday.