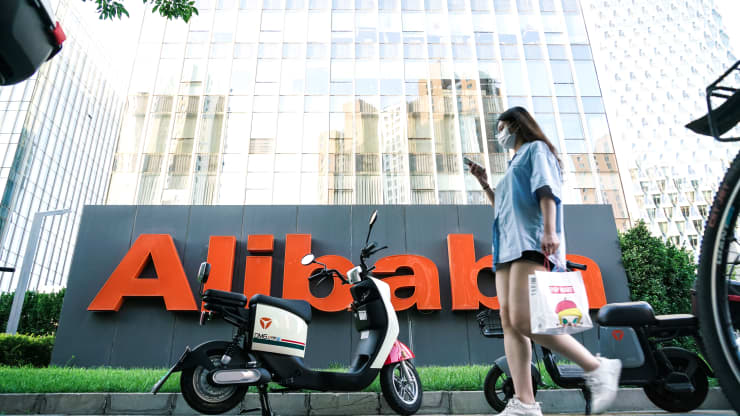 Collected Image
Alibaba’s revenue could decline for the first time on record when it reports June quarter earnings on Thursday, analysts forecast, though it could signal the bottom for sales. The Chinese e-commerce giant is expected to report fiscal first-quarter revenue totaling 203.23 billion yuan ($30.05 billion), down 1.2% from a year ago, according to consensus forecasts from Refinitiv.

Alibaba’s revenue has slowed sharply over the last year amid a slowdown in the Chinese economy, a resurgence of Covid and subsequent lockdowns as well as the regulatory tightening on the domestic tech sector. But the June quarter could mark a bottom for Alibaba’s results as revenue is expected to improve in the coming quarters.
Read More : Alibaba to grow Southeast Asia e-commerce arm to $100 bil
“In aggregate, we believe the soft June quarter results are largely expected by investors and the current focus for the stock is the recovery trend in the 2H, on which we remain positive as the government continues to step up economic stimulus to achieve its GDP growth target,” U.S. Tiger Securities said in a note last month.

September quarter revenue is expected to grow 7% while the December quarter could see near 10% growth, according to Refinitiv estimates. Softness in this week’s report will mainly come from weakness in the company’s China commerce revenue, China Merchants Securities said in a note published last month.

CMR is revenue Alibaba gets from services such as marketing that the company offers to merchants on its Taobao and Tmall e-commerce platforms. Vendors cutting back on ad spend hits Alibaba’s CMR.

However, China Merchants Securities said it sees the China commerce business having a “gradual recovery ... with improving profitability thanks to discipline cost control.”

Alibaba could get some tailwinds in the coming quarters to help its recovery. There are signs that China’s regulatory crackdown — during which Alibaba was fined 18.23 billion yuan — is beginning to ease.

Meanwhile, the Chinese government in May announced a range of economic stimulus designed to help an economy battered by a resurgence of Covid and lockdowns in major cities, including financial metropolis Shanghai.

However, not all analysts expect to see a return to explosive growth for Alibaba. “When I visualize my ‘cone of all plausible outcomes,’ the plurality of scenarios lead to a modest reacceleration of growth back to the mid-teens, but I also see a whole category of scenarios where things get much worse on the fundamentals,” John Freeman, vice president at CFRA Research, told CNBC via email.

Cloud computing in focus
Besides Alibaba’s core commerce business, investors are also focused on cloud computing revenue even though it still accounts for under 10% of total sales. That’s because investors see Alibaba’s cloud efforts as key to the company’s future growth prospects and profitability.

“Cloud growth reacceleration is key for me to turn positive again on the fundamentals because cloud generates much more operating leverage than e-commerce fulfillment and is intrinsically a much more profitable business,” CFRA’s Freeman said.

“Cloud is the reason for most of Amazon’s appreciation in value over the last decade and that could be true for Alibaba eventually.”