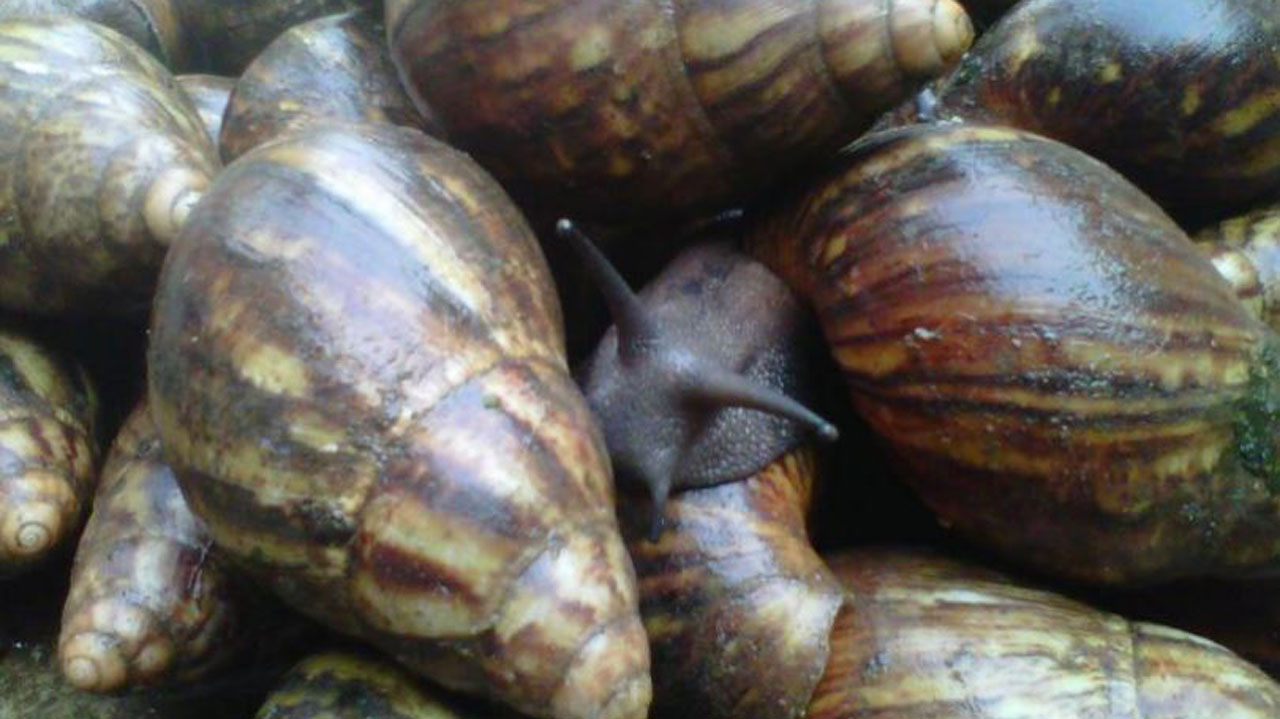 Collected Image
Snail farming is one of the sustainable, money-spinning Agribusinesses that most Nigerians ignore. Also known as heliculture, snail farming is a process of raising edible snails for human consumption or cosmetic purposes.

Snail is a common delicacy and healthy meat, credited with a very healthy source of protein, phosphorus, calcium and iron, and low in fats, sodium and cholesterol.

Though it requires a little investment, the profit margin on snail farming is high. In Nigeria, table size snails can go for between N500 – N600 and the large size (Jumbo) can go for between N1, 000 and N1, 500 for just one, depending on the size, a snail farmer, Victoria Ojo-Ijelekhai disclosed.
Read More : Agribusiness not any more overwhelming nation's populace
While noting that snails can be reared in boxes made of suitable substances like wire gauze (net) and woods, she said there are different kinds of snaileries that can be built, adding that some factors have to be taken into consideration, such as the snails’ stage of development and habits.

One major advantage of the animal is that they are easily exportable live, with a shelf life ranging from two to six months. There are many species of snails, but three – Achatina Fulica (also known as East African land snail), Achatina Achatina (Giant Ghana snail or Giant tiger snail) and Archachatina Marginata (Giant West African snail) are commonly reared, says Douglas Smart Chukwudi, founder of Stream Snail Tech, based in Lagos.

“Secondly, all snails are edible. It depends on the environment and community you find yourself. What is not edible in one community is edible in another community.”

Ojo-Ijelekhai said, “Snail farming is one of the lucrative businesses in agriculture that is worth venturing into. You can start with little or zero capital and it can also be done on a large scale. The demand for snail meat (escargot) is high both in the local and international markets and that makes it a lucrative business.

“Imagine having 1,000 pieces of large snails, which you can sell for N1, 000 each, that’s a million naira return. Another thing is that snail can be sold at any stage of growth. You can sell the eggs to other people who want to venture into the business.

“If you are supplying 2,000 pieces to a new snail farmer, that would be N600, 000. Snail farming is very lucrative but you have to really have practical knowledge about it before starting.

“It is highly profitable, but if you are looking for a quick source of income, don’t venture into it. You’ll get tired because they need time to grow. And if you want to start cashing out millions, then you must be ready to invest in the business.”

According to her, snail meat is high in demand, because “it is very rich in protein and low in cholesterol unlike other meats like cow and pork. It has a unique taste; during dry season, people are not opportuned to pick snails in the bush because they’ve gone into hibernation; and its slime is useful in pharmaceutical and cosmetic industries.”

Currently, the demand for snails is high than what is offered – an indication that the market for snails is endless, both locally and internationally, says Chukwudi.

He said, “Starting small and large businesses is the only way to close the gap between demand and supply in Africa. Of recent, consumers are becoming more aware of the effects of high cholesterol on the body. The demand for snails in local and international market has been growing over the years.

“Starting a snail farming business is cheaper than most other types of farming. In terms of cost and time, farming is a low risk and profitable business unlike many other farming businesses, farming requires little startup and labour costs. One can start with N50, 000 or even less depending on the size of your farm, the capital available and the plan you will benefit from.”

Continuing, Chukwudi said, “In snail farming business, you don’t have to pay or lose money just because you want to farm. Many of the daily necessities for successful farming are provided by nature as a gift.

“Things like snail food, for example, are mainly leaves, fruits, or herbs that can be obtained locally, things that can be found for free. Another important factor for the daily operation of a snail farm is water. Apart from the cheap and affordable snail food, most of the materials that will be used to feed your snails are usually household waste.”

On the health benefits, he said snails are nutritious meat that is eaten all over the world, due to its anti-inflammatory and antioxidant properties. “They have anticancer properties and boost the immune system. The average snail is 80 per cent water, 15 per cent protein and 2.4 per cent fat. They are rich in vitamins E, A, K and B12 and essential fatty acids, calcium, iron, selenium and magnesium.

Health Benefits
“Snail meat is a great source of protein and low in fat, snails are also a good source of iron, calcium, vitamin A and many other minerals. Vitamin A helps the immune system and strengthens your eyes. It also helps your body cells to grow.

The iron nutrient found in snails is essential for building red blood cells and carrying energy around the body. A lack of iron can lead to extreme fatigue and anemia.”

He advised salary earners and other categories of workers willing to earn extra income to embrace the line of agribusiness, as “It is not time-consuming. Anyone can do it, whether you are working or not. Snails are night eaters, and as such you don’t need to feed them during working time. You can do snail farming as second source of income.”
Source: https://guardian.ng