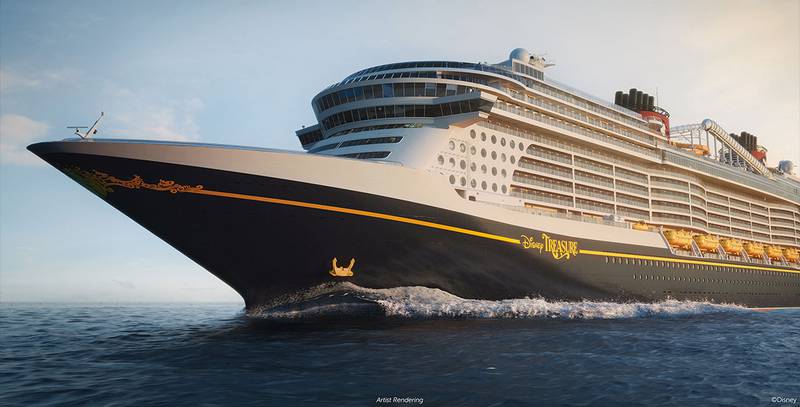 Collected Image
Disney’s newest cruise ship will be called the Disney Treasure and it will start sailing in 2024, it was announced at the D23 Expo, the annual unveiling of news related to the brand, in California this weekend.

The sixth Disney Cruise Line vessel has been designed with adventure in mind. It will be a Triton-class ship featuring characters from Aladdin, one of the entertainment company's classic films.

Based partly on the Middle Eastern folktale One Thousand and One Nights, Aladdin depicts the story of a street urchin, his pet monkey and his love for a royal princess.
Read More : Cruise tourism market is forecasted to be appraised at US$ 17.4bn. by 2032
Aladdin and Jasmine will be cast in gold in the ship’s three-deck-tall Grand Hall. They will be joined by a statue of their magic flying carpet, which whisks the pair over the desert sands of Agrabah in the film.

Filled with the “grandeur and mystery of a gilded palace”, the vessel will draw on “real-world influences from Asia and Africa and pay homage to the far-off land of Agrabah”, said Disney.

New destinations are also being added to some of the company's existing cruise itineraries. For the first time, ports in Australia and New Zealand will be included, from October next year. The Disney Wonder — a 294-metre-long ship inspired by the golden age of cruising — will also be voyaging to the South Pacific for the first time next year.

Ports in Fiji and Samoa will be among its new destinations.

Located in Eleuthera, the destination encapsulates the natural beauty of the Bahamas and will offer hotels, swimming pools, beaches and more that will highlight Bahamian culture for passengers.

It will be powered 90 percent through solar energy, said Disney. The tourist destination will offer sustainable economic opportunities for locals in the Bahamas, a destination that Disney has been sailing to since 1998.

Lighthouse Point is less than 200 kilometres from Castaway Cay, a Disney destination in the Abaco chain of the Bahamas.