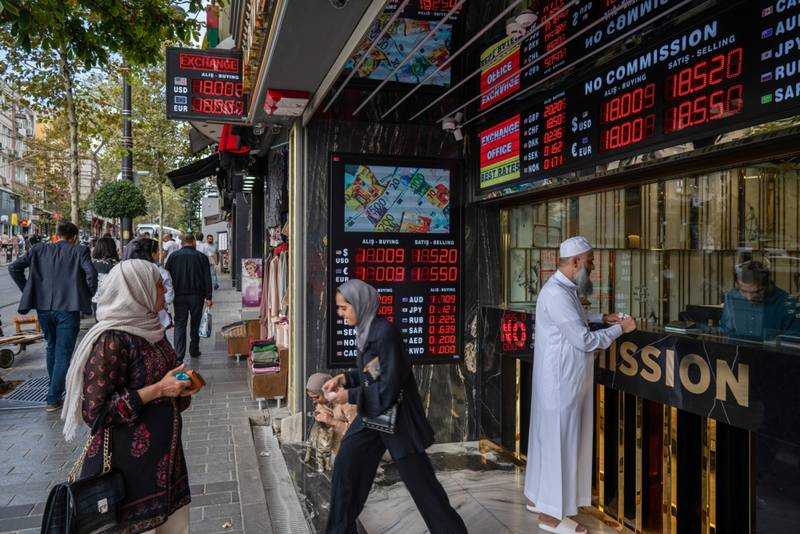 Collected Image
Turkey’s central bank made another shock cut to interest rates, despite inflation running at a 24-year high and with the lira trading at a record low.

The Monetary Policy Committee led by Governor Sahap Kavcioglu lowered the benchmark to 12 per cent from 13 percent on Thursday. The lira extended declines after the decision and hit a fresh low against the US dollar. It was trading 0.3 percent weaker against the dollar at 3.04pm UAE time.
Read More : Turkey's inflation set to hit new 20-year high, adding to lira's weakness
Most economists surveyed by Bloomberg had predicted no change after an unexpected 100-basis point cut in August that ended a seven-month pause. A minority that included Morgan Stanley, UniCredit and Citigroup had forecast a cut.

In a statement accompanying its decision, the MPC said there was a “loss of momentum in economic activity due to decreasing foreign demand”. President Recep Tayyip Erdogan and his ally Mr Kavcioglu are sticking to an unorthodox playbook that resists rate increases to contain inflation. The approach has encouraged economic growth at the expense of price stability and left Turkish assets more vulnerable to sell-offs. As a result, annual inflation has shot past 80 per cent, while the lira is among this year’s worst performers in emerging markets.

Explaining its decision to lower rates last month, the MPC said it was responding to a loss of economic momentum and did not plan to embark on a new easing cycle, saying “the updated level of the policy rate is adequate under the current outlook”.

For many economists, the messaging had suggested no additional rate cut was likely until later. Mr Kavcioglu, in a blog post last week, repeated that macroprudential measures and policies aimed at widening the use of the lira would be used to achieve price stability. He’s the fourth central bank governor since 2019 after Mr Erdogan fired three predecessors.