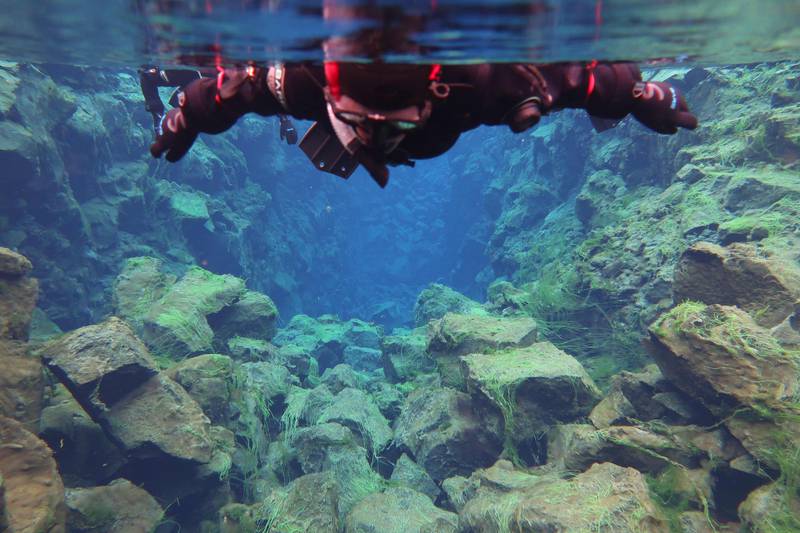 Collected Image
In between the North American and Eurasian tectonic plates, Silfra fissure in Iceland is one of the world's most famous dive sites, popular with tourists who venture into its icy waters.

Visibility underwater can exceed 100 metres and the spectacle of light and darkness is hypnotic. "When we entered the water, it was ..." says Icelandic tourist Brynjolfur Bragason before pausing. "Incredible," adds his wife Hildur Orradottir.

In the heart of Thingvellir National Park, on the edge of one of the largest lakes in Iceland, corridors of submerged rocks form deep cavities in between the two continents, which move away from each other by about two centimetres every year.

The orange reflections are mixed with various shades of blue in the more than 60-metre-deep rift, located in the southwestern part of the Atlantic island.

The beige sand and the phosphorescent green of the algae add to the colours. "It looks like hair," says Camille Lund, a French-American tourist.

The fissure and the entire surrounding valley lie on the Mid-Atlantic Ridge, which runs through the island, making it one of the most active volcanic areas on Earth. Silfra was formed by an earthquake more than two centuries ago as a result of a tectonic drift and the clear waters come from the nearby Langjokull glacier, the second largest ice cap in the country.

Water travels for several decades through a tunnel of underground aquifers around 50 kilometres long. "This whole filtration system through the volcanic rocks ... gives us super-clear water," Thomas Gov, a diving instructor from Toulouse in the south of France, told AFP.

Taking a dip in Silfra requires a lot of preparation as well as a dry suit, diving gloves, swimming hat, mask, snorkel and fins. The equipment allows swimmers to stay dry and float peacefully on the surface in water, which stays between 2°C and 3°C all year round.

Only part of the face and hands are exposed to the icy water. "You can feel it in your lips right away: they go numb after a while and they are like tingling," says New Yorker Ian Zavatti, 13, standing next to his father. Snorkelling is the most popular activity, but the more experienced and certified can dive with a scuba tank to a depth of 18 metres.
Source: https://www.thenationalnews.com